A group show on writing and rewriting history

“The future is certain”, according to an old Soviet joke. “It’s the past which is unpredictable.” This exhibition reflects on the ways history is written and the inevitability with which the past reasserts itself in the future. Bringing together works from nine artists and collectives, The Future is Certain is an economy of ideas and artworks as well as historical facts and records that refuse to disappear on their own.

The past is a force that needs work – cultural, social, political, psychological – otherwise it tends to reaffirm itself in the future. History itself is the central subject of the show: It is a research material, a source of imagery, a producer of revolutions, wars, inventions, and prophecies, and an object for thought.

In the exhibition, Lithuanian artist Deimantas Narkevičius rewinds history with his iconic video work Once in the XX Century. Filmmaker Jonas Mekas discusses politics, his experiences, his dreams, and his past life as a bumblebee with curator and cultural attaché Justė Kostikovaitė and London artist Johnston Sheard in a conversation titled On Life. American artist Emily Newman’s The New Chelyuskinites brings us back to a 1933 Soviet expedition of experienced Arctic explorers and unseasoned enthusiasts traversing the Northern Maritime Route in a conventional ship instead of an icebreaker.

Lithuanian filmmaker Emilija Škarnulytė captures a mermaid in a decommissioned NATO base in Arctic Norway, while Canadian artist Felix Kalmenson, in his installation Atlas, presents a messianic personification of time who speaks to an electronic clock designed to measure the cycle from 1988 to 2000.

Slavs and Tatars joins in on the Russian joke of the exhibition’s title with their Горы от Ума (Mountains of Wit). Rather Than Happiness further explores the Caucasus, researches the ancient Khazar people, and reflects on three Abrahamic religious discourses: Christian, Muslim and Jewish. Belarusian artist Jura Shust reflects on the concept of a noosphere, the sphere of consciousness and human thought. Finally, Juan Pablo Villegas presents an actual mirror, made by the artist from the silver of analogue film slides which once depicted ancient archeological sites, titled Moneda, after the Goddess of memory. 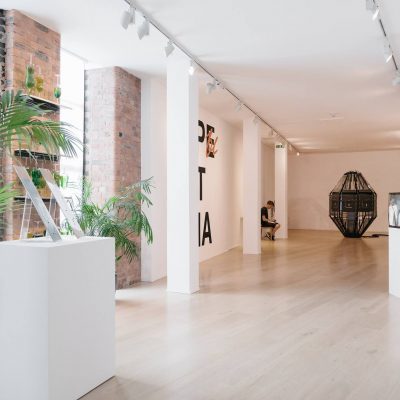 Art Night 2017: The Future is Certain; It’s the Past Which is Unpredictable